Robert Oak, an online friend of mine, has a post up….

Check it out. It might change your view of a few things….

Yep, I was on the phone to India while getting ‘support’ for my installation of MS Small Business 2007 and you will never, never, believe how I finally got it ‘installed’.

The translation of this song, interestingly it’s about separation, is here.

This Speaks for Itself. The Message is Unacceptable to me. What Say You?

Then go here to speak out…..and demand that the national media do the same!

Or prepare to live as slaves of  the corporate state.

One of my biggest problems with Senator Obama was his heretofore weakness on taking a stand on the loss of good American jobs from such mindnumbingly stupid, for a real Democrat anyway, legislation such as NAFTA and CAFTA under the rubric of ‘free trade’. David Sirota, a Obama critic for the same reasons I have, talks about a change in Obama’s rhetoric today in his column.

‘I don’t know about a time-out, but I do know this – when I am President, I will not sign another trade agreement unless it has protections for our environment and protections for American workers. And I’ll pass the Patriot Employer Act that I’ve been fighting for ever since I ran for the Senate – we will end the tax breaks for companies who ship our jobs overseas, and we will give those breaks to companies who create good jobs with decent wages right here in America.’

Clik on thru and read more, Obama is starting to talk about issues important to progressives, and the nation, in ways that demonstrate that he is willing to act contrary to the corporatist scum who are looting and wrecking our country for their own private gain.

More of this please, Senator.

Introduction to ‘Complexity Economics’: Wherein A.Citizen discovers that his’Theory of Pie’ turns out to be valid! 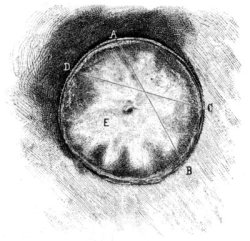 I finally finished The Origin of Wealth by Eric D. Beinhocker. It will soon be available in our Brain Food section.Why did I read this book? Well, Matt Stoller mentioned it at OpenLeft and I thought it sounded interesting. And was it ever! Thanks Matt for the tip.

Many of you have heard my ‘Theory of Pie’ as it applies to differentiating between progressives and ‘conservatives’, at least if you came to the meetings you would have. It goes like this:

‘When a ‘conservative’ or libertarian sees someone about to slice up a nice juicy lookin’ pie they immediately become concerned that there won’t be enough pie for them to have a piece. The ‘conservative’ immediately calls upon government to seize the pie by passing confiscatory pie taxes and then using tax law give the pie to him, the Libertarian asserts that there must be a ‘Free Market for Pie’ not subject to any regulation whatsoever. He plans to ‘corner the market’ in pie and never be without pie again.

The progressive scratches his head wondering at the behavior of the ‘conservative’ and libertarian’s actions and sets about planning to make more pie. He has a good recipe form his mom and figures he can easily make plenty of pie for everyone.

That’s my ‘theory of pie’. Now, from very near the conclusion of Beinhocker’s book we have:

‘As agents(people) follow cultural norms they interact, and create complex dynamics. For example, let’s examine the interplay between those who believe the world is a zero-sum game and those who see it as non-zero-sum game. If your beliefs are biased toward seeing the world as zero-sum game, then our objective will be to get your slice of the pie. You will view someone else’s gain as your loss, and your proclivity to cooperate will be low. Rather than searching for new, more complex, and wealth-creating cooperative activities, people will invest their energies in finding ways to capture a greater share of the existing wealth. It is not hard to imagine that thievery, dishonesty, and corruption will be higher in such a non-zero-sum society. The moral attitudes around such activities will also be different: for example, theft might be viewed as ‘I’m just taking my fair share…’ from someone who has more than his or her rightful share.’

A certain similarity there I’d say. So far so good thinks I. I’ve been on the right track all along in my perspective on the vile, ‘conservative’ world view it would seem.. But the author goes on to set my hair on end fire with this paragraph:

‘Now imagine a (society) in which some (Conservatives) think the economic pie is fixed, while others (Progressives) have a non-zero-sum view…..When researchers model (using computers) the dynamics (of such societies), they often find there is a tipping point: once a society is past a threshold ratio of noncooperators (guess who they might be) versus cooperators (Progressives) in a population, it becomes very hard to maintain large scale cooperation (median wealth), resulting in a ‘poverty trap'(see Great Depression).

This is not the blatherings of some fringe economist. Note who published this book for one thing. The footnotes and Googling and my opinion is that this guy is the real deal and he’s talkin’ revolution. The author contends that a paradigm shift in the theory and practice of economics is upon us that will impact our lives in a manner similar to the application of the scientific method to the physical sciences.

Most people called that the ‘Industrial Revolution’.

Would you like to send a message to our new ‘Queen’?

Doesn’t she look radiant and wonderful in her coronation picture? 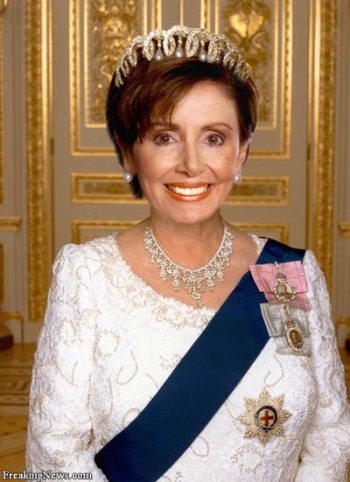 She said of Code Pink, more about them soon, that,

‘I had, for five months, people sitting outside my home, going into my garden in San Francisco, angering neighbors, hanging their clothes from trees, building all kinds of things — Buddhas? I don’t know what they were — couches, sofas, chairs, permanent living facilities on my front sidewalk.”

Unsmilingly, she continued: “If they were poor and they were sleeping on my sidewalk, they would be arrested for loitering, but because they have ‘Impeach Bush’ across their chest, it’s the First Amendment.’

And to ice the cake she said of Rep. Pete Stark’s recent statement about Mr. Bush and his Fascist death cult that,

‘While members of Congress are passionate about their views, what Congressman Stark said during the debate was inappropriate and distracted from the seriousness of the subject at hand _ providing health care for America’s children,’ Pelosi said.

Apparently in her haste to get down on her knees for Bush, Rush and the screamers of the ReichWing she forgot that the ‘serious subject at hand….’ got handed along with her Armani-suited ass…right back to her. Nice work Nancy…..

This post is to tell this rich, out of touch bitch that I’ve had enough. Yep, no more. To see why just go ahead and clik on her picture.Warning: If you are squeamish don’t. Don’t face the reality that this clueless member of the uber-rich doesn’t want to deal with. You see getting along in ‘The Village’ is the most important thing for her. As to the person you see, and it is a person,
when you clik on the image above? Why Madame Speaker Pelosi could care less.

And that’s unacceptable to me.

I’m going to start linking to Code Pink so that any of you who want to take direct action
against this monster, this heartless failure of a human being you can join with them.

I’m also working on creating an opportunity for direct action through B.R.A.G.

One thing I’m not going to do is let ‘Madame Speaker’ pretend everything is just fine.

‘Cause it is not.

Just because you happen to be a little paranoid does not mean that ‘they’ are not out to get you!